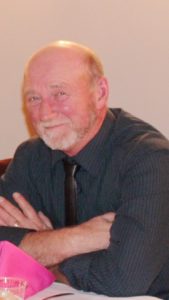 Michael Paul Kuyek was predeceased by his parents, Steve and Elizabeth Kuyek; his grandparents, Theodore and Katherine Kuyek; Mike and Mary Lukas; and nephew, Evan Kuyek.

Michael is survived by his wife, Linda; his children and step-children, Ryan(Cheryl), Jenna(David), and Curtis in Winnipeg, Nicholas(Sam) and Nathan in Yorkton; numerous grandchildren; his brothers, Terry(Brenda), Bernie(Charlene); his sisters, Marion(Brian) Gnam, Barb(Elden) Kammer, Lena(Juergen) Bauer; and numerous nephews, nieces, aunts and uncles

Mike was born in Bralorne, BC. Then as a young boy, his family moved to Regina, SK where he went to school. Mike’s first job was at Wester Clay, he then worked at Motorways, Co-op Dairy’s, Sysco and Federated Co-op.

The family wishes to extend a special thanks to the Martensville RCMP, the first responders, the Paramedics, and to the staff at the Royal University Hospital for the care of Mike.