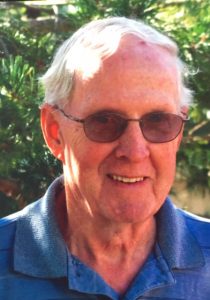 Neil James Mathews, 81, of Dalmeny SK passed away peacefully on August 2, 2019 in St. Paul’s Hospital, Saskatoon SK after a lengthy battle with Parkinson’s Disease. Neil was born on March 8, 1938 in Lewvan, SK. Neil worked for the Family Farm Improvement Branch, was an instructor in the Water Sciences Program at Kelsey Institute, and worked on oak furniture with Bakker Brothers. Neil and Linda were married on April 28, 1962 and raised three children.  He was predeceased by his parents, Ernest and Valette Mathews. Neil is survived by his wife, Linda (Gebhardt) Mathews, his son Robert (Corinne) Mathews and their children Parker and Olivia; daughter Janet (Michael) Wallentiny and their children Selena and Drew; and daughter Brenda (Darryl Robinson) Mathews. In memory of Neil, donations may be made to Dr. Ali Rajput Endowment for Parkinson’s Disease at Royal University Hospital Foundation. A private family gathering was held.

One response to “Neil James Mathews”