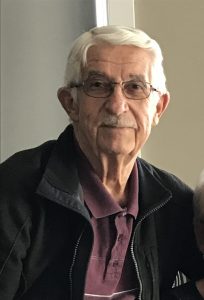 It is with great sadness that the family announces the passing of a loving Husband, Father, and Grandfather on August 29th,2022. He was 81 years of age. Oni was born on February 25, 1941 to Dan and Annie Sackney on their farm near Buchanan, Sask.

Oni graduated from High School in Buchanan in 1959. He went to the Sask. Training School in Moose Jaw and in 1962 received his Diploma in Psychiatric Nursing. There he met the Love of his Life, Etta who was also in his class. He proposed at graduation and they were married on October 6, 1962. Doug was born in 1964 and Rob in 1968 whom he loved dearly and was so happy and proud of them in their endeavors through life especially the Grand Children.

Oni went on to get his Social Work Degree and spent most of his career working for the Department of Social Services. He received early retirement at 46 years of age due to a government program” the Golden Handshake”. He enjoyed working as a carpenter, a plumber’s helper and building houses.

He was involved in the Community whether it was teaching Firearm Safety Courses, on the Victoria Hospital Board, as a Counselor at Candle Lake, many years as a member of SnoDrifters and Ducks Unlimited. He was a homebody but enjoyed many trips whether up north in a truck camper or to faraway places. Mostly he enjoyed any occasion to be with family and friends golfing, playing cards – especially Kaiser or enjoying company at home. His friends were so important in day-to-day life.