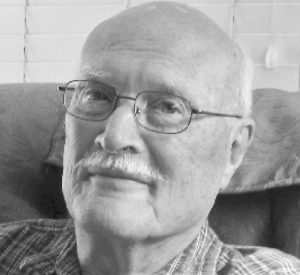 Paul’s family is sad to announce his peaceful death in the early hours of September 1. Paul was born in Bristol, England. He graduated from the Royal Veterinary College in London in 1947. For the next 19 years he worked in private dairy practice mostly in Castle Cary in the county of Somerset. He married Pauline Barlow, his childhood sweetheart, in 1948 and they had six children: Timothy, Rosalyn, Anne, Sally, Mark and Peter. Paul and his partners developed the first large animal hospital in Southern England. Early in his practice life Paul took an interest in cattle lameness. His first film “Lameness in Cattle” was sold and distributed by a pharmaceutical company. Paul was an ardent rugby player, a game which he played from the age of 10 until 36. While in Castle Cary he and two colleagues founded a veterinary cooperative, Centaur Services, which today is the largest company supplying pharmaceutics to veterinary practices all over the British Isles. In 1966 Paul brought his family to Canada and became a member of the faculty of the Western College of Veterinary Medicine (WCVM), University of Saskatchewan, from which he retired in 1992. Soon after his arrival, he took a year’s leave of absence to work for a project sponsored by FAO to develop an audio visual service at the Autonomous University of Mexico. On his return he was appointed Director of Audio Visual Services at the University. In 1972 Paul married Sharon Leedahl and this marriage was blessed with a son, Paul Tobias, and a grandson. When Paul returned to the faculty of the WCVM, he spent the first two years teaching the anatomy of the limb. This experience equipped him for his higher studies and research into the cause, treatment and control of lameness in the dairy cow. Until about 1985 Paul directed his clinical work towards the treatment of individual lame cattle. Later he was invited to study problems in beef cattle which initially was related to conformation and the association between founder and nutrition in intensively fed bulls. However, his most important work aimed to reduce the incidence of lameness in dairy cattle, a condition which causes the greatest pain that cows are forced to suffer. Paul was proud of his contribution to the understanding of animal welfare. Throughout his academic career Paul was a writer and delighted in storytelling. One story was developed as a 300-page book which won a Saskatchewan Writers’ Guild Award (1988) for describing his sabbatical leave spent at the University of Mexico while living in a travel trailer with his wife, Sharon and young son. He published many reviews and research reports in veterinary journals. In addition, he coauthored the standard veterinary textbook on bovine lameness “Lameness in Cattle” which has gone to three editions and been translated into four languages. Perhaps the favorite among his publications is a booklet that he coauthored for the ZINPRO Corporation especially for cattle producers. This booklet has had about 80,000 copies printed and been translated into several foreign languages. After Paul retired in 1992 he became an international lecturer on bovine lameness, an expert litigation consultant, and an on-farm consultant in bovine lameness. He continued his research into his 80’s. In 2000 he started to carve and paint wild birds, a hobby he enjoyed for the rest of his life. Another of his retirement hobbies was cooking and writing an anecdotal story of his life. Paul was predeceased by his son Mark in 2004 (and daughter-in-law Sandra in 2008) and daughter Anne in 2014. Left to grieve him is the love of his life Sharon, his wife for 46 years, and his children Tim (Laurene), Rosalyn (Paul), Sally (Ken), Peter (Jayne) and Toby (Jackie), as well as 13 grandchildren, 14 great-grandchildren, and 1 great-great-grandchild. The family wishes to thank Dr. M. Jutras of the Lakeside Medical Clinic for his attentive care of Paul for so many years. There will be a private family gathering later in the month.