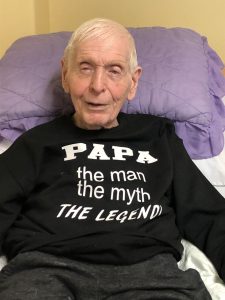 Robert McDade died peacefully in palliative care at St. Paul’s Hospital, surrounded by his loving daughters and granddaughters. He was 89 years old.

Robert was predeceased by Shirley, his wife of 67 years, their infant daughter Linda his parents Alex and Pearl McDade and 2 of his siblings; Jean (Marvin) Gibbs and William (Gladys) McDade, brother-in-law Jimmy Hunt, and recently sister-in-law Gladys McDade.

He will be forever missed by his children Kevin (Rita) McDade, Lynne Woynarski, Lori (Terry) Wawryk, Kim (Dan) Lockert, and his only surviving siblings Nancy Hunt.

As well, he leaves behind his great-grandchildren Liam, Lincoln, Paige, Kira, Brooklyn, Brody and Sydney.

Born in Davidson, SK, Robert was the 3rd of 4 children of Alex and Pearl McDade. The family farm was located in Simpson, SK, and Robert worked very hard alongside his dad. Ultimately, he did not choose to become a farmer. He chose to leave the farm to marry the love of his life Shirley Darlene Grier and live with her in Saskatoon, SK. There he worked for the Quaker Oats mill, hauling bags of flour and testing product. When the mill shut down he worked for the city of Saskatoon in sanitation, and later as a janitor.

Robert was a kind, gentle, loving person. He was a devoted husband who supported his wife through years of health problems. He was an excellent father who, with the help of Shirley’s mother, worked full time and took care of his 4 children whenever Shirley was ill. Throughout all of this he never complained. He could always be counted on to do what needed to be done. He never lost his cheerful demeanor or his sense of humour.

Robert had an inquisitive mind. He was an avid reader of anything to do with science, particularly astronomy. He believed that, in an endless universe, man could not be the only intelligent being. He was particularly fascinated by the thought of man someday living on Mars.

He had a passion for music, particularly classic country, Lawrence Welk and Andre Rieu. He never learned to play an instrument himself but he made sure all his children had music lessons. He was very pleased and proud when his children decided to form a family band which they named Jonah. For years, he gave generously of his time, driving them to play for dances and helping them to haul their equipment. He was lovingly known as the band’s “honorary roadie”.

He loved nature and all animals, particularly dogs. He and Shirley raised many dogs together throughout their married life. They spoiled them rotten, but had a lot of fun with their “children”. From time to time, Robert dabbled in carpentry. It was an interest he said he picked up when he was a boy, watching his grandpa Kennedy, whom he adored.

The McDade family would like to thank Porteous Lodge for their care of Robert in the last year of his life. Thanks also to palliative care at St. Paul’s Hospital and Cherished Memories Funeral Services and Crematory for treating him with respect and dignity.

He will be sadly missed, but never forgotten. 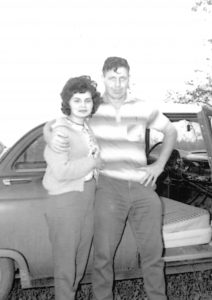 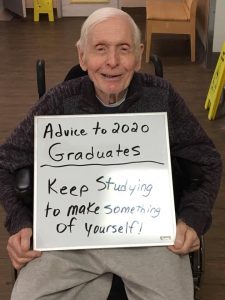