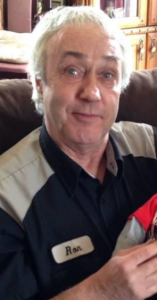 It is with heavy hearts that we announce the passing of Ron Joseph Sevigny. Ron was born to Romuald and Eunice Sevigny on September 24th, 1951 in Prince Albert SK. He enjoyed a career as an auto body mechanic and worked for Northway Chev-Olds (later Mann Motors) until his well-deserved retirement in 2017.

Ron married his best friend and love of his life, Maureen Sutherland on February 19th, 1977. Ron leaves behind so many to mourn him, including his daughters, Roberta (Curtis) and Jessica (Tyler), his grandsons Aubrey, Tylor, and Boston, his sisters Eleanor (John) and Lillian (Ron) and his brother Dave (Shelly), brothers-in-law Rick, Roly (Gayle), Doug (Fern), Tommy (Shannon), John (Jean) and Chris (Carol), sisters-in-law Peggy, Lori, Penny (Robin), Cathy, and Lynnelle (Kevin) and many nieces and nephews

He is predeceased by his wife, Maureen, his mother and father, Romuald and Eunice, his sister Elizabeth, his brother Richard and his sister-in-law Margot.

Ron was well liked by everyone he met and loved and cherished by those who knew him well. He was a father figure and role model to many. He liked reading, watching nature and science documentaries, fishing and camping, and he enjoyed watching the Red Wings play hockey. He will be remembered as a contented, laid back, cool guy and he’ll be sorely missed from our hearts.

A Funeral Service for Ron will be held on Monday March 15, 2021 at 11:00AM, located at Cherished Memories Auditorium in Martensville, SK. The Service will be available via livestream at https://distantlink.com/cherishedmemories.html