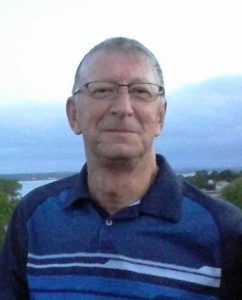 Ronald Alvin Kalyniuk passed away Sunday January 1st, 2023, at St Paul’s Hospital in Saskatoon at the age of 77 after a short but difficult fought battle with cancer.

Ron was born July 22, 1945, in Rose Valley, SK to Pearl Kalyniuk. He married his wife Carol Morozoff in 1968 in Wadena, SK.  Ron completed his schooling in Moose Jaw, SK as an Electrician and then moved to Flin Flon, MB where he was employed at HBM & S until 1981. They moved to Martensville in 1981 where they have resided ever since. Ron retired from Westburne Electric in 2008 and enjoyed retirement to its fullest. They enjoyed travelling and went on many holidays.

At his core Ron was a giver and always there with a helping hand. He volunteered his time on numerous committees and sports teams as a coach as well as a team member. He was instrumental in building the arena in Martensville that still stands today. He was honored by Canadian Blood Services for his numerous blood and plasma donations and gave thirty years of his life as a volunteer with the Saskatoon Blades working as an usher. He also volunteered at City Hospital, as well as serving on the Board for Saskatchewan Housing in Martensville for many years and was one of the founders of the Martensville Free Pantry food bank. His willingness to help anyone at anytime is something that we should all aspire to. Ron was an avid Blades, Blue Jays and Riders fan and always enjoyed watching the games with much enthusiasm.

He was a devoted husband, father, and papa and would do anything for his family. Always upbeat and quick with a smile his mere presence brightened any room he was in.

Ron truly loved life and made the most of each day. His loss will leave a profound absence in many lives. They say that you should leave the world a better place than when you entered it, and he did just that.

The service will be held Saturday, January 7, at 1:30 p.m.  at Cherished Memories Funeral Services, 591 Centennial Drive N, Martensville, SK. For those unable to attend, a livestream link has been set up at https://funeraweb.tv/en/diffusions/66708.