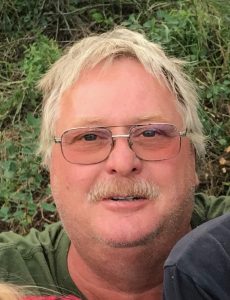 It is with great sadness that we share news of the sudden passing of Rusty Durant, 58, on Sunday, February 23 of 2020. Beloved Husband, Father, Grandfather, Uncle, and Friend, Rusty’s presence and loss is felt deeply by many.

Born on December 10, 1961 in Saskatoon Saskatchewan, to Ellen and Hans Christensen, Rusty spent his childhood, teenage, and adult years in complete adoration of his parents and brother Ian.

Having finally met his match when he came across Laura in 1997, Rusty was absolutely delighted when they married in December of 2012. She was, and is the complete love of his life.

Rusty loved a good laugh. He gave a mean Donald Duck impression. He made superior BBQ sauce and his homemade bread garnered line-ups in the kitchen. He loved camping. He was a dog guy, and loved getting dogs (his and others) worked up. He knew his way around a good string of cuss words. He worked hard and often and loved it. Still, Rusty was the master of unfinished projects. He was incredibly generous and would drop everything to help a family member, a friend, a friend of a friend. He cared about the important conversation surrounding mental health. He could be just as whimsical as he could ornery. He was also as comfortable in the theatre as he was in front of a schooner of beer and two pounds of wings. He had respect for any place that could serve up a good burger. If his t-shirts offended you, he was all the more likely to wear them and even his best shoes had paint on them. His coffee was strong and muddy. He liked the word “kiddo.” He was a jungle gym for his nephews, niece and grandchildren. He gave huge, enveloping hugs. He always ended phone calls with “bye for now.” He loved deeply, without expectation or limits.

Friends and family are welcome to join in a celebration in Rusty’s honour in the Riel Room at the Ramada Hotel between 1 and 3pm, Saturday the 29th of February. We look forward to connecting and sharing the meaningful impact he had on so many.