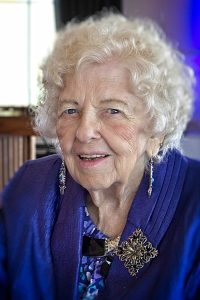 It is with great sadness that we announce the peaceful passing of Ruth Ann Evenson (nee Fryer) on July 17, 2021 at the age of 95.

Ruth was pre-deceased in 1993 by her husband Lloyd Donald Evenson, the love of her life, as well as her parents Malcolm and Nina Fryer (nee Clark) and her brothers and sister-in-laws Frank and Sheila Fryer and Charles and Claire Fryer.

Ruth was born in Sutherland, Saskatchewan, the youngest of three children.  Mom said of her childhood that “My family was considered poor but we made the most of it by picking berries, swimming, and fishing”.   Most families faced similar challenges during the Depression.

As a child, Ruth enjoyed taking the train to spend time with her Grandma and Grandpa Clark and her uncles (especially Uncle Frank) on the farm at Dundurn.  She was very proud of her Blackley and Clark ancestors who in 1884 settled in the Blackley District east of Saskatoon and eventually in Dundurn.  She helped compile “The Fryer Family Album” depicting her family heritage.

Ruth was an accomplished knitter, who could carry on a conversation as she efficiently knit sweaters, christening gowns, mitts and socks.  Her knitting skills were honed during World War II, making many pairs of socks for servicemen.

Ruth attended Albert Elementary School and graduated from Nutana Collegiate.  She was always very proud of her schools and attended several Nutana reunions with her brother Charlie.   She then completed a bookkeeping and commercial typing course before working in the office at TM Ball Lumber.

Ruth often told the story of her first attempt at making a pie in her late teens. It was a total failure.  She buried the blob of dough intended to be the crust in the garden.  A dog dug it up and brought it to the house for all to see.   Over the years Ruth refined her baking skills becoming legendary for her apple, pumpkin and Saskatoon berry pies, peanut butter cookies and shortbread.  Her pie crust was always incredibly flaky.

Ruth met Lloyd in early 1948 at a dance.  She knew he was the “one” for her.   In June 1949, they married in the front yard of her parents’ home on 13th Street.  They spent their honeymoon in Edmonton at the CNR MacDonald Hotel.

Ruth perfected her seamstress skills early in her life, sewing most of her cloths.  She put her skills to good use.  Just before Ruth’s wedding, the dress shop caught fire and her wedding dress was destroyed.  She purchased material, a pattern and sewed a new wedding dress in time for her wedding.  She went on to sew wedding dresses for her daughter and two daughter-in-laws.

In 1952, Ruth and Lloyd purchased their first home with the arrival of their first child, Barry.   They renovated the small house and hand dug a basement.   It was at that time that Ruth and Lloyd met Ruth and Ray Wolfe.   The two Ruth’s became life long friends.

In 1955, Ruth and Lloyd moved once again, this time in anticipation of the arrival of their second son, Brad.   They purchased a brand new 700 square foot house on York Avenue.   Ruth said it was ‘out in the country” with cows in the backyard and mud everywhere.   Ruth easily fit into the neighbourhood and made many life long friends.

The family again moved with the arrival of Adele.  This time they purchased a 1080 square foot new house on Porteous Crescent.  At last there was enough room for the family.  Ruth put her creative and decorating skills to work over the next forty years decorating, painting and wall papering their home, keeping pace with the changing styles.  She became an avid gardener producing large quantities of vegetables for the winter and decorated the yard with an assortment of bedding plants

In 1964 Ruth went to work at Central Drugs.  Later with the building of Market Mall, Ruth worked for Ricki’s and later became the manager of the Factory clothing store.  Her career in fashion retailing extended over three decades.

Ruth was always fashion conscious and had her own flair.  Working at Market Mall exposed her to the latest styles.  She loved to dress for parties, social events, visiting friends and attending dances.  Ruth and Lloyd were incredible dancers especially when they jived.  They were in total sync.  They enjoyed entertaining and lived life to the fullest.

As their children grew older and left home, Ruth and Lloyd took advantage of their freedom and began to travel.   They vacationed in Hawaii and California, and cruised in the Caribbean.  They enjoyed bus tours to different casinos in western Canada and the northern USA.

Lloyd’s failing health in the early 1990’s necessitated a triple bypass that went wrong.  During his two-month recovery in intensive care, Ruth entered a Colgate toothpaste contest.  She won the grand prize – a Caribbean Cruise for two.  They took their last cruise together a year later.

Lloyd passed in December 1993, leaving Ruth to live the next 28 years by herself.  She continued to enjoy bus tours, bingo, garage sales, and helping family and friends where she could.  She visited her brothers Frank in Saskatchewan and Charlie in BC.  She spent several Christmases with Barry’s family in Winnipeg.

Ruth enjoyed hosting family gathering, celebrating birthdays, having sleepovers with her grandchildren, her grand dogs and cats, reading, and spending time at the cabin.   She was famous for her angel food birthday cakes, jellied salads, baking, and bright sparkly outfits.

Ruth’s last major trip occurred on her 90th birthday when she, her children and their spouses met for five days in Las Vegas.   She was in her glory.  Her stay was highlighted when she won a $400 jackpot on her last spin before returning home to Saskatoon.   Ruth’s stay was capped off when the taxi company substituted a limousine for a cab.  She was ecstatic at receiving such royal treatment.

Ruth suffered from failing health when she was 92 necessitating leaving her apartment for Stensrud Lodge.

We sincerely thank the caring staff at Stensrud Lodge, especially Rose whose kindness and friendship is very much appreciated.

A celebration of Ruth’s life will be held at a later date. 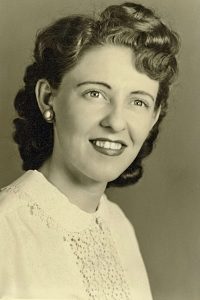