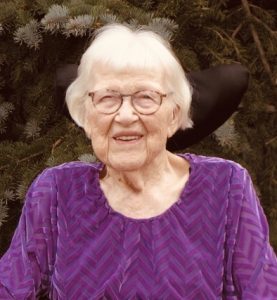 Salome Ratzlaff passed from this life to eternal life with her Lord and Saviour Jesus Christ, on November 10, 2021, two days short of her 103rd birthday. She was born on November 12, 1918, the day after the Armistice of the Great War, so her parents named her Salome which means “Peace” in Hebrew.

Salome grew up on the family farm west of Waldheim. Her father was the Ältester or unpaid minister of the Salem Church so church life played a central role in her life. He made his living as a school teacher who taught in various District Schools so Salome attended the schools where he taught including Windom from 1925 to 1926 and Brotherfield from 1927 to 1930. She was forced to quit school in Grade 9 to help full time at home due to her mother’s poor health. In 1938 she attended Bethany Bible School where she also took some high school classes while having to work in the kitchen to pay her tuition. Hard work took it’s toll on her physical health and in 1940 she was admitted to the Saskatoon Sanatorium with Pulmonary Pleurisy of the lungs with the risk of developing Tuberculosis. She returned home from 1941 to 1942 for bed rest and slowly she regained her health. She completed her high school by correspondence during this time.

Salome had been secretly in love with William J. Ratzlaff from the Salem Church since age 12 and had made her desires known to the Lord. He answered her prayers and in November 1942 he proposed marriage which she happily accepted. They were married in July 1943. Due to William’s status as a Conscientious Objector he was required to remain on the farm for the duration of World War 2 so they began married life, farming. Their first son Paul was born in 1946 in Saskatoon. In the fall of 1946 they moved to Pambrun, SK. for William to finish his 3rd year of Bible School that had been interrupted by the war. They were accepted by the Krimmer Mennonite Brethren Church Conference to become missionaries and they moved to Kansas in 1947 where William attended Tabor College to become an Ordained Minister.

In 1949 they went to assist with the Conference mission work in the Smokey Mountains of North Carolina, ministering to the African American community who faced much discrimination. In 1950 they were asked to take over leadership of the Conference mission work in Arkansas with the Ozark Mountain People who faced much poverty. Their second son Philip was born in 1952 in Harrison, Arkansas. In 1961 they moved back to Canada to pastor the Peoples Church near Sarnia, Ontario and in 1971 to Dalmeny, SK. to pastor the Dalmeny Bible Church. Finally in 1973 they came full circle and moved back to Waldheim when William became Manager of Mennonite Trust. Salome joined him in the office as secretary assisting with conveyances and estates. Throughout their working years, Salome not only maintained a home and raised a family, she worked along side William in their ministry.

In 1982 they retired in Waldheim and enjoyed many years of fishing and gardening together. In 2001 they moved to Pineview Manor in Rosthern. After William passed away in 2003, Salome moved to Bethany Manor in Saskatoon in 2004 and finally Spruce Villa in Dalmeny in 2019 before needing to move to the Spruce Manor Special Care Home in 2020. Special thanks to the staff there who provided loving care to Salome to the end of her life.