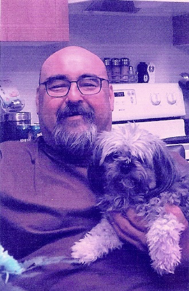 Samuel (Sam) James Russell, 57, of Saskatoon, Sk. Passed away after a courageous battle with cancer on August 31, 2018. Sam was born on April 30, 1961 in Saskatoon to Sanford Russell and Anne Truyien. Sam spent his childhood in Saskatoon then moved to Vancouver for several years. He had moved back to Saskatoon about 8 years ago. Sam worked construction and renovations as a carpenter most of his adult life. Sam was a Montreal Canadiens, Saskatoon Rush and Saskatchewan Roughrider fan. Sam enjoyed nothing more than spending time with family and friends. And family and friends will miss his smile and his laughing eyes. Sam was survived by his girlfriend Bonnie Gamble; his brothers Darrel (Patty) and Brian (Tracy); his sister Brenda (Jack) and numerous nieces and nephews. He was preceded in death by his parents. A celebration of Sam’s life will take place at a later date.