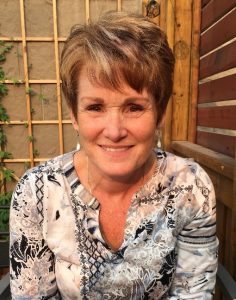 Sheila Marlene was born to Isabelle and Barry Howes on July 19, 1968, in Yorkton, SK.  As she was approaching the age of 2, she became a big sister for the first time to Beverley Gayle.  At the age of 4 she moved with her family to Calgary, AB.  There she started school and at age 6 became a big sister for the second time to Carleen Elaine.  At the age of 8 she moved with her family to a farm south of Tisdale, SK.  She attended Sylvania School where she completed grade 9 and then attended Tisdale Unit Composite School for grades 10-12, graduating in 1987. As a youth she helped on the family farm with all things farm related including feeding the livestock and milking cows and loved the family pets.   She was involved in a variety of activities including Brownies, 4-H, figure skating, ringette, baseball, cheerleading, downhill skiing, and some snowmobiling.  She babysat many youngsters, helped teach figure skating the beginners, worked in the Coop cafeteria, waitressed at the Venice House and worked as a receptionist at a local salon.  She moved to Saskatoon to attend Marvel Beauty College in the summer of 1987.  It was at this time that she met her future husband, Dennis.  She completed her Certificate in Hairdressing in September of 1988 and returned to Tisdale to work as a hairdresser at local salons prior to returning to Saskatoon.  Sheila and Dennis were married on April 14, 1990 and have resided in Saskatoon throughout their marriage of over 32 years.  She worked as a hairdresser at Eaton’s and Plus Ten salons during which time she obtained her Journeyman Certificate in Cosmetology in 1994. She then continued to do hairdressing from her home while she worked at Standard Machine doing administrative work.  She decided to return to a career in cosmetology purchasing “Studio 2000”.  In September of 2004 Sheila became a mother to Dustin Andrew – her pride and joy!  It did not take Sheila very long to decide that her new passion was being a stay-at-home mom to be with her son.  She continued to do hairdressing, nails, and other salon services out of her home and as Dustin got a bit older, she started driving school bus which she and Dustin both enjoyed.  She then embarked on a new career attending SIAST, obtaining a Certificate of Distinction Educational Assistant in 2012 and working at River Heights School.  She also then went on to obtain a certificate in Office Administration.  In her spare time, she was a Norwex consultant and loved spending time with friends and family.  She enjoyed the outdoors –camping, fishing, golfing and just sitting in the sun. She also enjoyed cooking, baking, curling, and bowling.  She was always up for a new adventure and enjoyed many travel opportunities with her family, whether it be a sunny hot destination or a getaway to the lake.  She had a very outgoing and social personality that resonated with all who met her.  Sheila is predeceased by her sister Beverley, nephews Jade and Zayne Carlson, Grandparents Jack and Elaine Howes and Janet Smith, father-in-law John Buller, brother-in-law Clayton Buller, and several aunts and uncles.  She will be deeply missed by her husband Dennis and son Dustin, parents Isabelle and Barry Howes, sister Carleen Carlson (Ron and Dominic) as well as all extended family members and friends.

Celebration of Life will be held on Friday, October 28, 2022 at 1:00 p.m. at Lakeview Church 19 Glazier Road, Saskatoon.  As part of the celebration, there will be an “open mike” opportunity to share memories about Sheila.   For anyone unable to attend the service, you can view the ceremony live or on replay at https://www.livememorialservices.com/en/diffusions/63000

Donations in memory of Sheila can be made to Kidney Foundation Of Canada, Saskatchewan (kidney.ca).