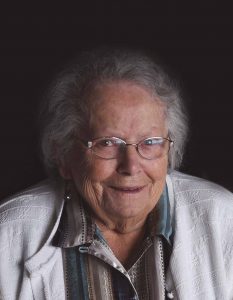 It is with heavy hearts that the family of Shirley Iris Lee (nee VonHagen) announces her peaceful passing two days shy of her 90th birthday. She is survived by four of her children Debbie Pearson (Jerry), Cyndy (Bill Brady), Brian, and Randy (Tammy) as well as 26 grandchildren and 25 great grandchildren. Also surviving are 2 brothers and many extended family members.

Shirley is predeceased by her husband, Mervin, daughter Judy, sons Tim and Jeff.

Shirley was born in Minto, Manitoba and spend her childhood in various parts of Manitoba. She attended Normal school in Winnipeg and taught in rural teacherages in Manitoba. These were one-room school houses teaching grades one through twelve.  The conditions were difficult but Shirley loved it. She eventually accepted a teaching position near Nipawin, Sask. where she met and then married the love of her life, Mervin. They relocated to Saskatoon where they stayed and raised their family of seven children.

After raising her children, Shirley rejoined the workforce and enjoyed many years of employment at Canadian Tire on Confederation Drive.

Shirley had a keen sense of humour, was a lifelong learner, enjoyed gardening, was an avid Blue Jays fan and always had a special place for her many pets.