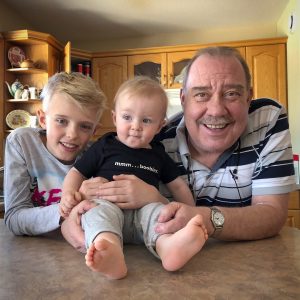 It is with heavy hearts that we announce the passing of our beloved husband, father and grandfather, Terry Robert Davidson, on Thursday May 30th.  Terry fought a fierce battle with a relentless foe, and was surrounded by his dearest loved ones, at home, until the very end.

Terry was born in Prince Albert, Saskatchewan on April 20th 1960, to Robert “Bud” Lewis Davidson and Moira Helene Davidson (Stenhouse), younger brother to Sandra and Karen.  He spent his childhood years in and around Prince Albert, and at the family “shack-tent” in Waskesiu, Prince Albert National Park.  Terry was a rambunctious child who kept his CN Carman father and Teacher mother, as well as his sisters, always guessing about his next adventure. In his teenage and early adulthood years, he kept busy working with Parks Canada, the Department of Highways, and the Military Reserves in Prince Albert.

Terry first laid eyes upon Amanda Scholfield, who had recently immigrated from England, in 1979 – and it was love at first sight!  They were married on June 20th, 1981, and spent the next 38 years together, raising their two loving children, Nigel Robert and Erin Margaret.

Terry was a dedicated 35 year, third generation railroader at CN Rail.  He hired out in March of 1980 in Prince Albert, and spent the next several years working conductor shortages across Saskatchewan and Alberta.  Terry and Amanda moved their young family to Saskatoon in 1987, where they found great success and happiness.  The family juggled shift-work for many years as a Railroader and Registered Nurse duo.  Terry worked as a Yardmaster at Saskatoon Yard up until his retirement in 2015.  Terry was an avid gardener, fisherman, and price-checker – he famously wouldn’t pay sticker price if he could help it!  He had an unyielding passion for History, particularly WWII history.  He found special joy watching his grandsons Owen and Oliver grow up.  Terry and Amanda enjoyed traveling and camping together, and shared in many unforgettable memories in Hawaii, on Vancouver Island, and at various campgrounds across Western Canada.

A celebration of life will be held on Thursday June 6th, at 13:00 at the Royal Canadian Legion Hall Branch 362 located on 3021 Louise Street, Saskatoon, SK.

In lieu of flowers, donations can be made to St. Paul’s Hospital’s “Close to Home” Campaign for Hospice and End of Life Care.