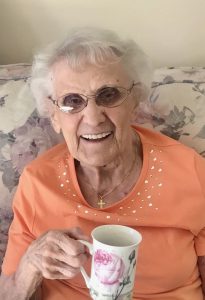 They were transferred from Brandon, Manitoba to Prince Albert, to Saskatoon in 1968, where they spent the remainder of their life

Thelma and Jack loved to travel, and two places that held special place in their hearts were Hawaii and Europe.

Thelma loved her cabin at Round Lake and enjoyed many summers there. There were many memories made there with her sons and grandchildren.

Thelma had a strong faith and was a very devoted, active member of the St. Stephens Anglican Church. Many lifelong friendships were

formed over the years from her involvement there. She cherished those times, and relationships.

Thelma loved her family beyond measure, her home was covered with family pictures, and when company would come over, she was sure to brag about each and every person in those frames. She was proud of her children and her grandchildren and had no problem expressing it.

Thelma had a great sense of humor, was extremely organized and was always sure to be looking her best.

She took pride in her appearance and how she carried herself.

Thelma is Survived and Lovingly Remembered by:

She was predeceased by:

Special thanks to her treasured friend and caregiver Sandy Forrest.

Memorial Donations can be made in Thelma’s name to St. Stephen’s Anglican Church.