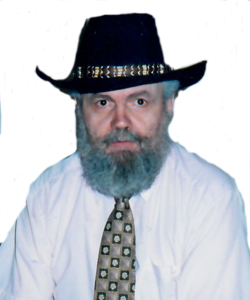 (by his sister, Ruth Marlene Friesen)

Our brother, Tom Edwin Friesen, passed on to glory on April 12, 2019 after 67 years and 5 months of a rather difficult life.

He was born October 29, 1951, to Henry H. and Elizabeth (Kroeker) Friesen of Chortitz, later of Hague, Saskatchewan. Tom was the third child in a family of five siblings; Ruth, Ernie, Tom, Elsie, and Erma.

Finding school difficult, Tom dropped out after grade 6 to take a job as a farmhand on the Peter Z. Neudorf farm just outside of Hague. Later he moved on to work on other farms in other locations. He met Elaine Lewis, who told him that she would be happy to live on a farm too, and they were married on September 30, 1972. Shortly after he discovered that she had many allergies and that he would have to give up his dream of living and working on a farm.

They moved into Saskatoon, and for a while he cleaned floors in St. Paul’s Hospital. After some heart-searching he decided that he would like to be a farm equipment mechanic. But he discovered at Manpower that he would have to have his grade 10 to take the mechanics courses. Tom was motivated to take the upgrading first, then the mechanics’ courses. He did well in both levels of education.

Two daughters were born to them, Darlene on December 23, 1979, while they were in North Battleford, and Sharon on January 7, 1982. Unfortunately, the marriage broke up in divorce in 1997.

Tom battled with depression and very low self-esteem for a number of years. This seemed to be the cause of the loss of feeling in his legs, so that he had to settle into a wheelchair in 1987.  Gradually though, as he heard other’s share their testimonies of forgiveness and hope on Christian talk shows, and as he read certain books, he accepted things as they were, and he developed a comfortable routine of going to the Midtown Plaza for coffee, watching for old friends from Hague, and choosing godly attitudes and thoughts, he became more calm and peaceful.

There was a surprise period in 1999, when Tom woke up one night to find sensations coursing through his legs. He got up and paced around and around, trying to decide what this might mean. In the morning he called his pastor at Westgate Alliance, to ask what he should do. The pastor suggested Tom share what he was experiencing with the congregation.

When he got up out of his wheelchair on Sunday morning, and walked to the front, they gave him a standing ovation! The healing lasted 15 months. Tom even took some life skills courses and was preparing for a new job career. Then in December 2000 a letter came from the Government saying they were cutting off his Disability Pension. Tom felt so devastated that he fell to the floor and had to crawl on his hands and elbows to get to his apartment.

On May 6th of this year, Tom woke up about 3:30 am with a terrific pain in his back. He called an ambulance for himself, and was taken to St. Paul’s hospital, where they performed two cat scans. The doctors informed him that a major artery had a tear in the inner lining the whole length of his upper torso. There was really nothing they could do for him except to keep his blood pressure as low as possible so the blood vessel would be less likely to break open, causing him to bleed internally.

Tom was able to leave this earth quickly on April 12th, and go to join his parents, who predeceased him, and also his sister-in-law, Penny Friesen, in Winnipeg, who passed away on April 4th.

He leaves to mourn and miss him, his brother, Ernie, (Winnipeg, MB), and sisters, Ruth (Saskatoon), Elsie (Abbotsford, BC), and Erma (New Hamburg, ON). There are still two aunts on Dad’s side, Aunt Jessie Switzer, in Vancouver, BC, who is 99, and Aunt Jean Friesen in Toronto. There are two uncles left on Mom’s side to remember Tom as well, Uncle Isbrand Kroeker in Chilliwack, BC., and Uncle Henry & Aunt Frieda Kroeker in Castor, AB. Plus forty-four first cousins.

Tom is survived by two beloved daughters – Darlene and Sharon.

A service of remembrance is planned for July 31 at 3 pm at Westgate Alliance Church, Saskatoon. Burial will follow at the Chortitz Cemetery 7 miles west of Hague.

One response to “Tom E Friesen”