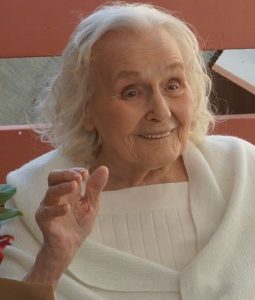 Vera was the third of eleven children of Herb and Edie (Crawford) Reid, born October 5, 1921, on the family farm near Renown, SK where she learned all the skills that would hold her in good stead when she had a home of her own. She married in 1943 and though this union didn’t last, she was blessed with the birth of her son, Roger. In late 1945, she went to try her luck in Ontario, where several of her siblings had ventured during the war years.  Her home base there was at Sharbot Lake, where her maternal grandmother Alice Crawford helped take care of Roger while she found employment in Kingston.  By 1952 Vera was ready to return to the family home at Renown, and shortly thereafter she married Harvey Shortt on July 18, 1953.

On May 26, 1956, Vera and Harvey’s only child, Pamela Jean was born. She was a special gift to both Vera and Harvey. From that day forward, Vera devoted her entire life to taking care of that precious babe.  After Harvey’s death in 1998, Vera had to carry on alone, and she never stopped doing her very best. All the nurturing and love that was poured into Pamela’s life gave the two of them a very special bond that has lasted till Vera’s passing on Saturday.  Pamela especially, will miss her dearly.

Vera died peacefully at Sunnyside Adventist Care home on Saturday, February 26, 2022. at the grand old age of 100 years, 4 months and 21 days. She leaves her beloved daughter Pamela and son Roger (Eleanor) Kennedy, 5 grandchildren, 12 great-grandchildren, 2 great-great grandchildren, her brother David (Sherron) Reid and sister Sandra Turner and many, many nieces, nephews, and cousins from the large extended Reid and Shortt families.

Our family is thankful for the compassionate care that Vera received during her time at Sunnyside over the last two years, and before that to Crystal and her staff at Whispering Flowers.

Cremation.  A private family interment of ashes will take place in the spring.