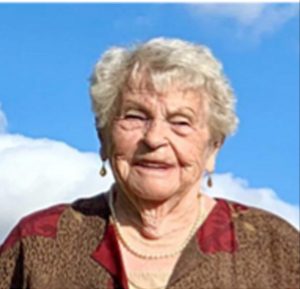 Waldine passed away suddenly at Saskatoon on October 19th, 2022, within a few weeks of her 96th birthday.  She is predeceased by her husband Eric and is survived by two sons (Steven and Ronald), four granddaughters and thirteen great grandchildren.  She was born in Poland on a farm near a small village.  She along with her family immigrated to Canada after surviving the events of WWII.  Much of her adult life was on a farm in Saskatchewan and later in Cranbrook BC when she and Eric retired from farming.

Waldine was raised on a farm in Poland and enjoyed a happy life until September 1939 when the war began in Poland.  In 1943 the German authorities removed them from their farm and had them move to western Poland.  During the latter stages of the war, they were refugees and survived a significant battle at the Odor River in a city called Kustrin.  Much of what she saw and endured during the war she did not want to talk about.  Because she could speak Polish, German, Russian and Yiddish, she had to become an interpreter and work in a kitchen for officers of the Russian army.  Her 10 minutes of fame occurred when she was required to serve lunch to the general and marshal of the Soviet Union Georgy Zhukov.  When the war ended, she and her family were used as farm labour by the Russians.  In 1948 the family was able to escape from the Russian occupied zone and escape to West Germany, then immigrate to Canada (sponsored by a half-sister already in Canada).  She arrived in Windsor Ontario and initially worked for a kind Jewish family, who helped greatly in getting her feet on the ground in Canada, so to speak.  Later she took on other employment to help her learn English which was an initial hardship.  Later she met Eric who was working as an automotive mechanic in Windsor and subsequently were married.  Shortly after, they took on Eric’s father’s farm in Saskatchewan near the town of Mossbank.  While in Mossbank they raised two sons on the farm.  During the Mossbank years they attended the AGC Church. They retired from farming in 1986 and moved to Cranbrook BC.  Eric died there in 1996.  Waldine continued to live in Cranbrook until 2009 when she moved to Campbell River BC to live with one of her sons.  She moved back to Saskatchewan in 2012 when her son took employment there.  She lived at the Bentley assisted living residence in Saskatoon until a sudden illness took her life.

Because she had outlived most of her people and those surviving are of advanced age and remaining family are scattered far and wide there will be no formal funeral services.  She requested cremation and that her ashes be buried nest to her husband in Cranbrook.  The family will get together sometime in late spring for a time of remembrance.

The story below is from granddaughter Olivia;

One of my favourite stories is of my grandmother’s cross necklace.

Her life was hard, and she was a survivor from the very beginning. I can’t help but realize that this month my oldest daughter is the same age as my grandma was on September 1, 1939, when war was declared and the very day the police took her father to an unknown prison camp. That day her mother sewed money into the hem of her dress and sent her to sleep in the fields of the farm so no one could find her in her house. Her childhood ended that day.

Several years later her family was caught on the eastern front towards the end of WWII. My grandmother who spoke many languages fluently (German, Polish, Russian, and Yiddish) was forced into the service of a Russian commander in an outpost. She worked in the kitchen, even serving General Zhukov her cooking once, and translated for the Russians. She was put in many awful situations and witnessed suffering and unspeakable horrors.

One day, a young German mother came to beg for milk from the Russians and asked my grandmother to speak on her behalf as she and her baby were starving. My grandma was frightened, but she approached the Russian commander and bravely asked for what she knew would not be given. He yelled at her and told her to send the young mother away and to “go ask Hitler for some milk.” My grandmother at great risk to herself found a way to regularly sneak this woman milk from the kitchen. She later insisted on giving my grandmother her cross necklace.

My grandma came to Canada not speaking a word of English. She went out for a job the day after she arrived in Windsor, Ontario. She married and had two sons. She lived a tough life on the farm in Saskatchewan and worked extremely hard her entire life. Grandma was so grateful to be accepted as a refugee to Canada and after witnessing and experiencing so much hatred she would reprimand us kids when we would ask about her German or Polish or Russian ethnicity. She would scold us and tell us, “I am only a Canadian.”

My grandma loved her family, and she was a believer. She struggled with fear her whole life, but she did not fear last night when she said she was ready to go to the Lord. We got to say goodbye. 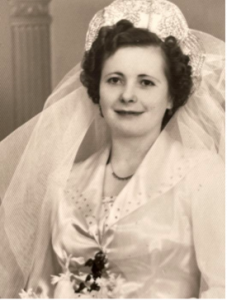