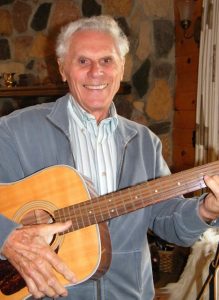 With deep sadness, we announce the passing of our father, Walt at the age of 92.  Walter was born in Garden River Municipality near Prince Albert. He was the third child of Olga and Pete Zameruk.  He grew up in the farming community around Marcelin and Blaine Lake.  Walt became a teacher working in a one room country school, then began a career with Saskatchewan Power, bringing electricity to rural Saskatchewan.  He worked at Queen Elizabeth Power Station in Saskatoon and finished his career as an instructor of Power Engineering at Southern Alberta Institute of Technology in Calgary.  In 1952, Walt married Nona Schreiner, settled in Saskatoon and had two daughters. He enjoyed playing music, especially the guitar, camping, travelling and could fix just about anything.  Left to remember are Elaine (John Kirstein), Yvonne (Herb) Schmidt, grandchildren Theresa (Richard McDonald and son Jonah), Michelle (Ryan) Ellson, Ben; great grandchildren Josh and Mia.  Close niece and nephew, Claire Reed and James Conkin, sister in law Joanne Zameruk and many nieces and nephews. Walt was pre-deceased by his wife Nona, his parents, sister Nina/Pete Conkin, brothers Cecil and Fred/Mabel, and niece Corinne Bueckert. We would like to thank all the special relatives and friends who kept in touch by phone with Walt during the time he was staying home though the pandemic.  Our family is grateful for the kindness and compassion of all the health care professionals involved with Walt’s care. Donations can be made to the Heart and Stroke Foundation.  A Graveside Memorial Service will be held at a later date.