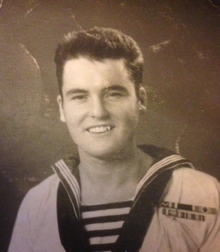 The flags were flying at half-mast at Dieppe Villa and Legion Branch 63 in honour of Will who passed away peacefully on November 3, 2019 at the age of 87 with his family by his side.

Will was born in Dublin, Ireland on October 25, 1932.  Will served in the Royal Navy as an Able Seaman from 1947 to 1953 and emigrated to Canada via Newfoundland in 1954 and eventually landed in Saskatoon where he started a new life and raised a family.

Will was predeceased by his son Rory in 1993, his parents and two brothers in Ireland. He is survived by; his loving wife, Jean, to whom he was married for 61 years; his brother, Robbie Scott in Wicklow, Ireland; and many nieces and nephews. He is also survived by; his children, daughter Kelly, sons Tim (Karen) and Casey; and his grandchildren, Kristen, Keegan, Erin and Liam.

Will had several different careers in Saskatoon including the U of S, SaskPower, Canada Post and retired from the Saskatoon Transit System in the early 1990s. Will was also a 60 year member of the Legion, Branch #63.

The family would like to say a special thank you to the nurses and care aides and all of Will’s “second” family at the Sherbrooke Community Centre for taking such great care of him for the last three years.

7 responses to “Will Scott”