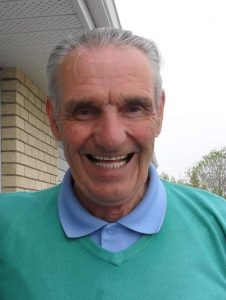 Billy was born in Redcar, Cleveland, England. He had 2 brothers and a sister. In his younger years, he was a Choirboy at Saint Peter’s Church in Redcar. It was due to this service that he said that “Him and God are Buddies”. His careers were with the Royal Air Force with a notable mention that he was witness to Christmas Island and its atomic testing that the troops and the island were subjected to. After he was finished serving his country, he started working with ICI and then British Steel in Redcar where he called home He went back to ICI after and formally retire from there in about 1988. He also had a side job as a Painter in the beginning and was regularly hired to paint the local school during break. Billy married Bette and had 2 boys, Martin and Michael. Bette unfortunately passed away too early at the age of 47. Billy’s son, Michael, Wife Joanne and their 3 daughters, Emily, Hayley and Laura moved to Calgary, Canada and Martin in still located in Redcar, UK.

Billy met his partner of 31 years, June on a blind date, by all accounts, they hit it off and started dating. As time progressed, they fell in love and that love would only grow. They were never married but you wouldn’t know it from the way they treated each other, always looking out for each other and their feelings.  Billy added to his family with June’s children-Nick & Tricia Gunthrie and children, Austin, Brianna, Taylor, Riley and Sophie.  Kathryn and her Husband, Michael and their 2 children Brendan and Elora.
Billy quite enjoyed dancing and live music. This usually occurred at the “Working Man’s Club” in Redcar. This is a club that Billy was a significant part of for 18 years as a treasurer. He took great pride in this position and the responsibilities that came with it. As Billy was very good with numbers, this job was perfect for him. He also enjoyed the “Pensioner’s Trips” in the summer times with the “Workies Club”. This is when a group of them would travel on the buses and pass out money to other pensioners in the area. It was their way of giving back to the community. He would typically end his duties with a pint of “John Smith’s” Ale.
Billy was very attentive to details and had an amazing memory. He would be seen taking notes in a journal regularly, to jog his memory in the future but not in necessity. He would like to read through old journals randomly and chat about the happenings of that day from memory.
During the day at home, in his later years, Billy enjoyed watching his “shows”. These included but were not limited to: Coronation Street, Emmerdale, Midsummer Murders, and Downton Abbey. Sometimes his show would stretch out to the late evening, but he watched with such intent, he wouldn’t doze off just in case he missed something. He would always cheer on Manchester United in the Football games and liked to talk Football with Kathryn’s husband, Michael.
Travel was not uncommon for Billy and June. They would venture up to Scotland to see friends, surrounding towns and cities, shopping and on many occasions, overseas to Spain. His favorite locations were Benedorm, Portugal, Tenerife, and of course, Canada. While in Canada, Billy greatly enjoyed going on drives. He was a great traveler, sitting for hours and looking out the window. He was always amazed at everything, the size of the vehicles, which he referred to as “Motors”, the vastness and open spaces, and the people. He was always on the lookout for Toyota cars, in particular the “Yaris” as he had one until a few years ago at home. He would get so excited about seeing a Yaris over here, he would enthusiastically yell, “June, June, Look! A Yaris… Just like mine at home! “Oh aye, look at it!”.  He had this same enthusiasm for trains, transport trucks and almost everything in between.The one thing that he could not get enough of was his love for the trains. Something that we take for granted or as an inconvenience while sitting at an occupied crossing was his happy spot. He would try to count the train cars at first, usually realizing quickly that we have much longer trains than he is used to at home. He would settle in awe of the size and complexity of such large units.
Sitting in the sun and people watching was also a favorite past time of his. He was known for finding a comfy seat in the local Costco and saying “Hi, Hi, its Billy here, Grandad Billy here, Hi, Hi” to anyone and everyone. He was our Billy, loving life, and everything in it. June would take him for walks down the street at home, he would sit on the short wall at the end of the road and watch the people go past. He would get the occasional honk from people that recognized him and that made his day.
It is with great sadness that we lost Billy; 85 years old is nothing to complain about. However, with him gone, all our lives are missing someone great. A companion, a wise man, a storyteller, a wealth of knowledge, a history buff and a solid memory just to name a few losses. His passing leaves an enormous hole I our lives, we miss you terribly and talk of you daily. We laugh and cry over our memories of you in our lives. Your involvement in all our lives made such an impact, you will never be forgotten by any of us.
You are at rest now, no more aches and pains, just rest. Until we meet again.
We love you Billy, always have and always will. Thank you for being there for all of us,